I recently visited Life Christian School in Tacoma, WA with my Science Magic school assembly and workshops.  This was part of their Zillions of New Experiences (ZONES) Day and featured my science stations along with other presenters, displays, and activities.

Life Christian is a private school with kindergarten up to high school.  I met one of their science instructors and was able to take a tour of two of their science classrooms.  Very impressive!  And, I could tell just by the answers to the questions I asked in my assembly program that the kids have a great grasp of science fundamentals.  The teachers also commented how well my program meshed with the topics that they cover (density, air pressure, center of mass, expansion and contraction, molecules, the scientific method, etc.).

Librarian Miriam Hodges transformed the gymnasium into a center for the hands-on stations and K-5 students rotated in throughout the day.  The “county fair” theme was great and included live goats and chickens, a midway theme, and a “big top.”

I created about ten different activities and parent volunteers assisted at the various stations.  This enabled hundreds of students to try different things during their time in the gym and saved the school $$$ as I didn’t have to hire staff to help me with the exhibits.

At the end of the day all of the students reassembled in the bleachers.  Their teachers dressed up as “mad scientists” to race to conduct a goofy experiment.  Fun!

Thanks to parent volunteer Kelli Stevens Roberts for sharing some fantastic photos from the assembly and workshops.

Three identical eggs; one sinks, one floats, and the third remains suspended in the water column. Hmm…

Sublimation: dry ice changes from a solid to a gas 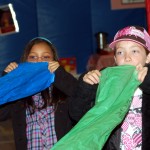 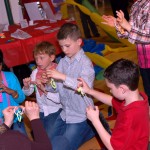 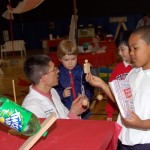 Discussing center of mass and counter-balance 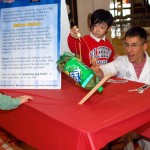 On a scale of 1-to-10, Jeff Evans’ “Science Magic” and the day he spent with us was off the charts!!  Jeff WOWed us 5 years ago with his assembly “Mission Possible” which fit into our ZONE Day (a day where the elementary students at Life Christian Academy all learn about a theme together).  This year, wanting to showcase our new Math and Science Institute, we learned of Jeff’s innovative presentation of “Science Magic.”  Jeff spent the whole day with us!  After his fast-paced assembly in which he experimented with matter, density, and gravity, he set up three tables with hands-on experiments for the kids to do throughout the day (Mobius strip, wind tubes, dry ice demonstrations, Levitating Magician – kids loved this one and could take it home as a souvenir of the day).   He reinforced what the kids already knew and understood with lots of interaction.   From beginning to end, the day was full of “Science Magic.”
–Miriam Hodges, Life Christian School

Watch videos of science demonstrations you can do right now, download my science activity sheet, and print out your own Levitating Magician.

Learn more about my assemblies and workshops for elementary schools at www.edumazement.com/science.html or call (360) 412-5064 or send e-mail to jeff@edumazement.com.