I officially proclaim February as “national Science Fair kick-off month.”   Of course there is no such thing, but I have done several Science Magic school assemblies recently for exactly that purpose!  It’s fun hearing how different schools conduct their Science Fair; some are juried, some are required for certain grades, some parents can assist with, some happen in the evening, etc.

Challenger Elementary in Sammamish has a unique theme of “Sky’s the Limit” for their upcoming Fair.  (The school’s namesake is the space shuttle Challenger, and their mascot is a comet, so this fits perfectly.)  Science Fair co-chairs Meredith and Amy explained their idea:  “If aliens landed on our planet, what would you teach them about our world?”  Students are encouraged to use the scientific method as the model for answering their questions and testing their hypotheses for their experiments.  They have plans to transform an old satellite dish into an alien UFO and plant it on the front lawn of the school on the day of the assembly.

This sounds outrageously fun to me, so I immediately brainstormed some possibilities.

Why not send out a press release and invite a REAL reporter to cover this story?  Maybe aliens would hear about it and decide to make the trip over to check it out themselves 🙂 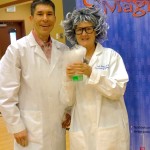 My and my “sister”, Professor GeRoy. (Her hair was chemically altered in a bizarre experiment-gone-wrong several years back!) 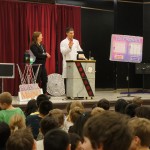 Students love it when their teacher becomes part of the show! 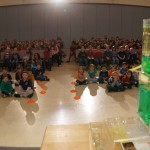 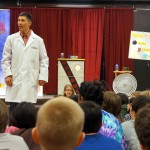 Thanks to Challenger Science Fair co-chair Amy for the photos 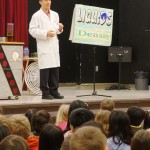 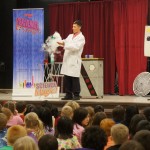 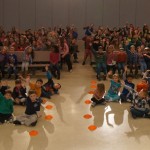 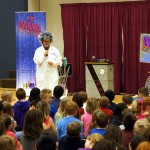 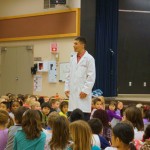 Discussing the properties of solids, liquids, and gases with students

For videos of science experiments you can do at home, visit my YouTube channel www.youtube.com/edumazement and scroll towards the bottom.  (Subscribe to stay up to date as new videos are added.)

I’m based in Olympia, Washington and perform throughout Washington and Oregon and can fly to your area as well.  To learn more about bringing a great science fair kick-off assembly to your school, call me toll-free (877) 412-5064 or send e-mail to jeff[at]edumazement.com.