Fundraising and assemblies have a bit of a symbiotic relationship:  you need to raise money to host an assembly, and using an assembly as an incentive can help make fundraisers more successful.  Thompson Elementary in the Spanaway – Tacoma area hosted a hugely successful fundraiser with Kal from World’s Finest Chocolate.  The school was offered to receive one of my assembly programs at half price if they met their fundraising goal.  Well, they crushed it!  Most schools with their number of students sell about $20,000 worth of chocolate bars.  They sold over $40,000!

Top selling students (those who sold three or more boxes) were excused to the gym early for prime front-row seating.  I chose from these rows when I needed volunteers. Afterwards, each of these top sellers – sixty of them! – received an autographed poster from me and had their photo taken with me.

Hats off to Shannon, Tacia, and the Thompson PTA who did a phenomenal job.  And, to principal Mr. Honig who receives the “Mr. School Spirit of the Year” award.  Kids got to decorate his hair and his clothes for the day (check out the photos below). 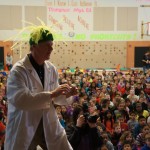 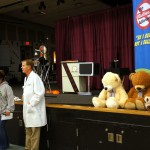 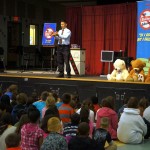 The reward assembly with magician Jeff Evans was a huge hit! 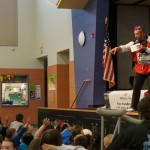 Principal Mr. Honig was a big reason for the success of the assembly 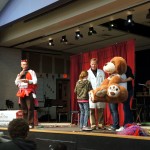 Only one way to carry a stuffed animal this big – you hug him and waddle! 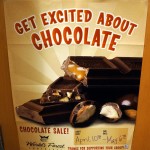 This was really a win-win-win event.  Kids received free chocolate and some earned additional prizes along with enjoying an awesome magic show.  The PTA earned a LOT of money that they can return to their students as they see fit.  And, someone got to eat a lot of chocolate.  What’s not to like about that?

No, there weren’t the traditional cheap plastic toys that other fundraising companies give away.  (And there are some really flashy prizes!)  I hope that my motivational-magic assembly will live on in their minds and memories much longer than a pen that lights up will.

If you’re in western Washington and looking to do something similar, contact either Kal or Travis with World’s Finest Chocolate.  They run a top-notch program and work with schools and other organizations looking to raise funds.  They can even customize the bar wrappers for you.  Tell ’em Jeff Evans sent you.