Magic was magical for about 130 kids and other onlookers last week as they packed the Yelm Timberland Library for “Magic Around the World.” Magician Jeff Evans’ 45-minute show captivated the audience by bringing each kid on an imaginary journey to global destinations with magic. Kids learned facts about landmarks, people, and history of countries around the world, including China, Egypt, Australia, and Japan. Evans showed maps, artifacts and color posters from each area featured.

Some of Evans’ magic tricks involved making water disappear in Egypt, crafting eye-popping origami in Japan and baking a pizza in Italy. Evans called a kid from the audience to help with most of his tricks. “Kids are easier to entertain but harder to fool because if they see anything they’re going to say it right away,” Evans said after the show. “Sometimes you want that and sometimes you don’t. My shows are real interactive, so whether it’s for kids or adults I want people to feel like they can have a two-way interaction with me.” 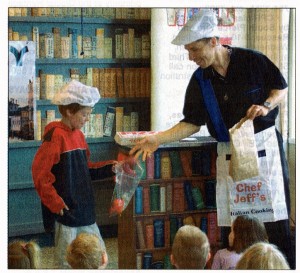 Jeff Evans tosses ingredients into a bag before making a pizza appear. Photo by Tyler Huey.

When the magic show focused on China, Evans said he needed a girl who was very good at following directions. Vivian Bolger, 8, eagerly raised her hand and was chosen to assist in a vanishing egg trick. Evans showed Bolger a plastic egg. She had to wiggler fingers, tap the egg that was underneath a cloth and the nit would disappear, which it did. Bolger told the rest of the kids that the egg was gone but the, like magic, Evans made it reappear.

“I was actually pretty surprised because he actually does all the magic,” Bolger said before leaving the library with her mom. “I couldn’t even feel it. I was pretty impressed when I found the egg in there. When it wasn’t there, I think he did have it in his hand or something,” she added. “I’m not sure because I’m not him.”

This was Bolger’s first live magic show. “It’s just really cool and kind of surprising,” she said. “That’s what I like about it.”

Evans was a few years older than Bolger when he got into magic at the age of 12. “The first magic book I saw had a picture of an empty hand reaching into the air and pulling money out of the air,” Evans said. “That immediately captured my interest as a kid. The first books I checked out were from the Lacey Timberland Library and my first show for Yelm Timberland Library was in 1998, and they’ve had me nearly every year since.”

Now at the age of 36, Evans has been a full-time magician for nearly 14 years. He said about 75 percent of his shows are for kid and family audiences. During the school year he does school assemblies, private parties, company events and banquets.

He designed “Magic Around the World” over the past four months. “Kids like goofy stuff where they think they’ve caught you even though it’s just kind of a sucker trick where they really haven’t,” Evans said. “And at the end they realize, “Oh, he was just messing around.'” 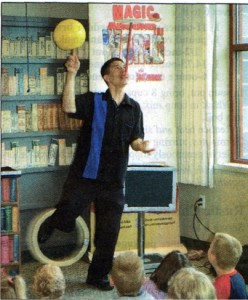 Magician Jeff Evans performs a difficult trick in which he does manyfeats simultaneously. Photo by Tyler Huey.

This was one of Evans’ 250-plus magic shows he does per year. A couple of tricks he did are in his regular show, but most of it is new material. He said the most difficult act he performed for the kids was while balancing on one foot, he spun a ring around his other foot and had a plate spinning on a mouth stick, all while spinning a ball on his finger as he juggled balls in his other hand.

Library Associate Mike McGowan said he is impressed every time Evans performs in Yelm. Evans’ act, and the allure of magic in general, is what captivates audiences. “I mean, to me, magic is something that is not easily explained,” McGowan said. “It’s not just kids. Adults love magic as well because it’s that unexpected result that gives us a thrill.”

This article was originally published on July 15, 2011 in the Nisqually Valley News.