Everett Christian School is a K-8 private school.  Upper grade students choose a question they want to answer using the scientific method.  One had the headline, “Which gender is more organized, boys or girls?”  Yes, that one had a predictable conclusion supported by a measurable chart of boys vs. girls as they “organized” a messy desk space.  “But no volcanoes”, a teacher told me.  “We want them to ask a question, make a hypothesis, and conduct experiments that can be numerically measured and a conclusion drawn.”  I love volcanoes as much as the next 5th grader, but I understand his point! 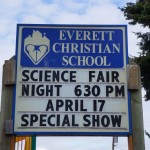 Excellent way to spread the word 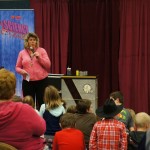 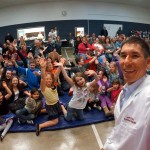 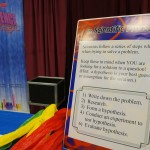 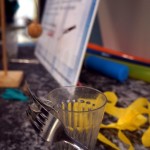 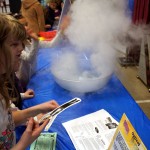 I set up several of my Science Magic Workshop tables so students got to try a number of center of mass, air pressure, topological puzzles, optical illusions, and more.

To learn more about bringing a school science fair assembly or workshop to your school in Washington state, call toll-free (877) 412-5064 or send e-mail to jeff[at]edumazement.com.