Finally:  an amazing, interactive, and funny show that kids and adults will want to experience together.  Kids love Jeff Evans:  he’s seen by thousands of them each week at schools, libraries, and special events throughout the Pacific Northwest.  Teens and young adults are fascinated by his magic, too, and each year Jeff performs for high school grad parties and colleges.

And let’s not forget about the corporate world:  many Fortune 500 companies call on Jeff to perform for their corporate events.  Boeing, Microsoft, Pepsi Cola, and R. E. I. are just a few of his repeat clients.  Like you, all of these people know that they can depend on Jeff for top-quality entertainment that makes people glad they came.

Jeff’s original routines have been printed in magic magazines including Genii, The Linking Ring, and M.U.M.  His Magic Tricks and Secrets DVDs have introduced thousands of kids to the art of magic.  He has won dozens of prestigious awards including Magician of the Year from the Vancouver Magic Circle and Stage Magic Champion from the Pacific Coast Association of Magicians.

Jeff was named Seattle’s Funniest Magician and ParentMap Magazine’s Best Live Entertainment two consecutive years.  A full-time pro since 1998, you can count on Jeff’s blend of clean comedy and amazing magic to win your students over and make you look like a genius.

His Zoom Room home video studio means that Jeff can now bring his one-of-a-kind motivational assemblies and magic shows direct to you anywhere in the world. Up to three HD cameras, professional sound, lights, and video switching software means you’ll

Jeff lives in Olympia, Washington and performs in-person shows primarily in Washington state and northwest Oregon.  However, he has a flight-ready show and can travel to you wherever you are. Call him direct at (360) 412-5064, toll-free (877) 412-5064, or send e-mail to jeff@edumazement.com.

Jeff’s career began from a book of coin tricks that he found at his grandparents’ house.  It was T. Nelson Down’s Modern Coin Manipulation, and Jeff was immediately hooked.  He went to the Lacey Timberland Library and checked out all of the books he could on magic.  Interestingly, about four years later, he performed magic shows for the three local libraries – the Lacey, Olympia, and Tumwater Timberland Libraries – beginning what has become a long relationship with libraries in Washington and Oregon.

Jeff performed magic as much as he could throughout college, working everything from children’s birthday parties to holiday parties and, slowly but surely, more libraries.  About 1997 the King County Library System was looking for programs with a science theme.  Jeff created his Science Magic show and enjoyed combining two things that fascinated him; science and magic.  After honing it at dozens of libraries, he added to the educational content and began offering it to schools.  It is hugely popular as a kickoff for school science fairs and feedback from teachers and staff shows that it does get students pumped up to participate.

This became a pattern:  programs that were created and dialed in for libraries were tweaked and presented for schools.  Reading Magic was a natural; not only did Jeff’s original inspiration to perform magic come from a book, but he consistently uses books as resources to solve problems, learn new skills, and entertain himself.  (Jeff won the Read-a-Thon at Lakes Elementary School in the 4th grade!) 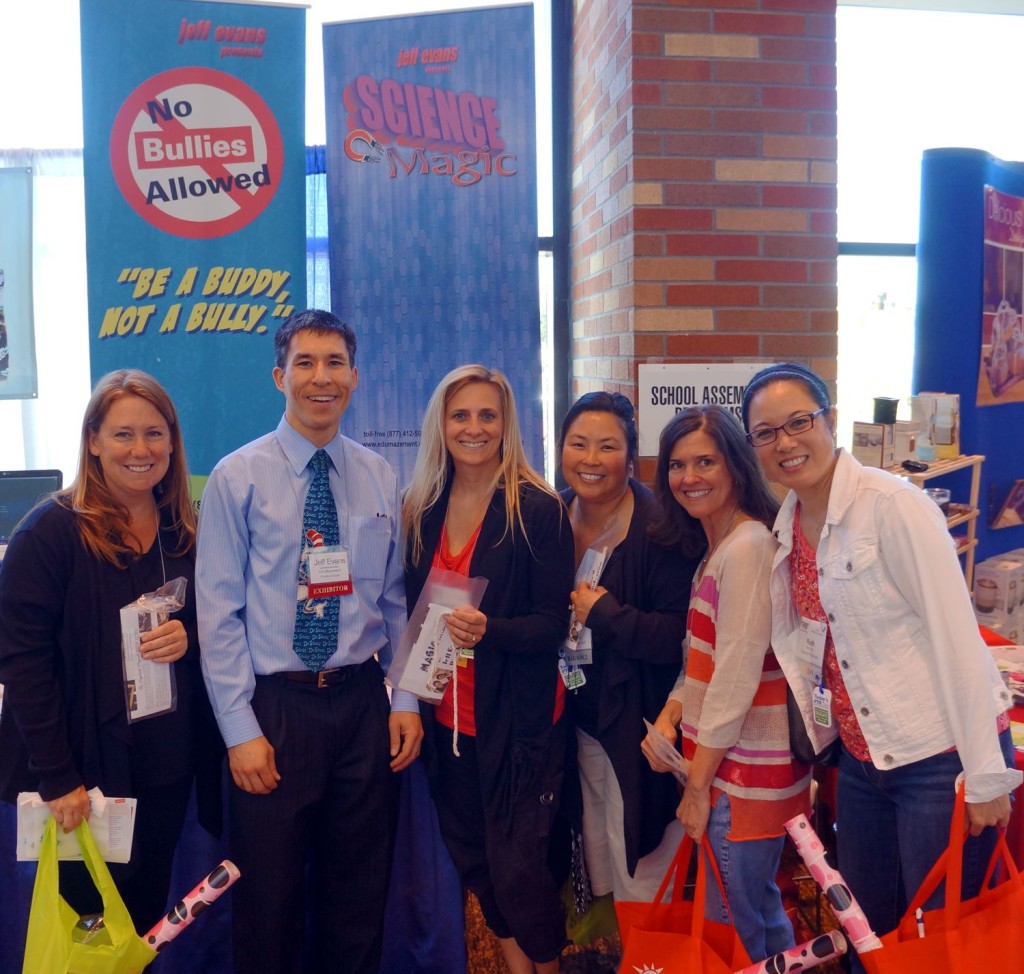 Great to see so many parents actively involved in their PTA! This school visited my booth at the Washington State PTA convention.

Today, Jeff’s Reading Magic show encourages kids to turn off the television and pick up a book.  This program is ideal for Read Across America, National Children’s Book Week, school Book Fairs, and as a reward for reading programs.  Science Magic is a popular kick-off for school Science Fairs and complements STEM curriculum.  No Bullies Allowed approaches the serious subject of bullying in a way that is both fun and memorable with techniques students can use whether they’re a victim or a bystander.

Science Magic with Jeff Evans at the Bellevue Library

Over the years Jeff has presented numerous magic workshops for kids (and adults) through school enrichment programs, parks and recreation departments, and artist-in-residence programs.   He sifted through his personal library of beginning magic books, mining them for the best items from here and there to teach.  With this background he teamed up with magic enthusiast George Ford to create the Magic Tricks and Secrets series of DVDs in 2009.  This video course in magic teaches kids (and kids at heart) easy-to-do magic using everyday items.  You can find the DVDs at several of the library systems in western Washington where Jeff has performed.  It’s always a treat when a child comes up and says, “I’ve performed the tricks from your DVD!” 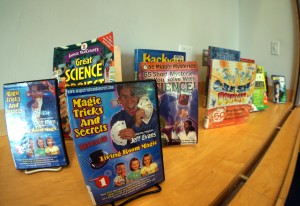 Jeff’s “Magic Tricks and Secrets” DVDs are available for check out at numerous libraries throughout western Washington. www.magictricksandsecrets.com

As families were social-distancing at home in 2020 Jeff purchased the rights to use original artwork by Ryan Pilling and introduced the Paper Magic Tricks Course. This is a collection of simple, amazing magic tricks that you can learn, make, and perform with nothing more than printed paper, scissors, and glue. It’s the perfect enrichment course, rainy-day activity, or class for someone who likes to learn new skills that are fun to share.

Evenings and weekends you’ll find Jeff entertaining for private parties, corporate banquets, festivals, and other special events.  Learn more at www.amazementproductions.com or be a fan on Twitter or Facebook.