Evergreen Christian Center in Olympia, Washington invited me to perform magic as a reward for a recenty fundraising campaign.  Laurie O’Brien with www.ThurstonTalk.com attended, took photos, interviewed me, and transformed the 45 minute show into a fantastic article.   She also captured some very magical moments from the show and was nice enough to share them with me.  Thanks, Laurie!

He didn’t attend Hogwarts, but Jeff Evans started studying magic at about the same age his fictional counterparts were heading off to  their first year at the legendary school of witchcraft and wizardry.

When he was twelve years old, Evans made a life altering discovery at his grandparent’s home in Spokane, Washington.  There he happened upon a vintage book of coin tricks, a forty year old text filled with classic sleight-of-hand magic.  He started reading and quickly mastered his first illusion…

Read all about it at http://www.thurstontalk.com/2012/01/22/the-real-job-of-making-magic-olympias-own-jeff-evans/ 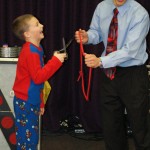 This is why I love my job 🙂 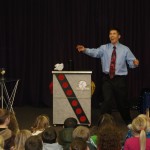 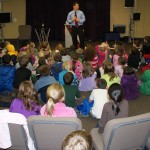 all photos by Laurie O’Brien 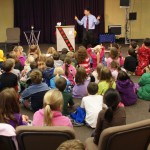 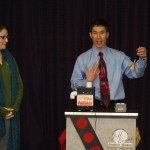 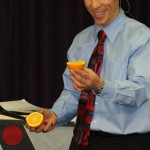 “Hey, money DOES grow on trees!” 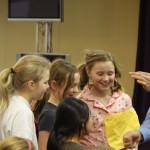 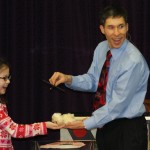